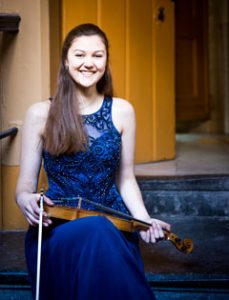 “Music is healing, pleasure and curiosity; but also confusion, sorrow and perfect imperfection. It is human and at the same time extra-terrestrial. Through my music, I hope to truly make contact with the listener, and to make sure they leave the concert hall slightly differently than how they entered. Even if it’s just a minimal change; a small thought or a new sensation.” – Pieternel

Pieternel Tils (1999) is a young Dutch violinist. At age five she started with violin lessons and when she was eleven, she was admitted to the Academy for Musical Talent. There she received lessons from Liesbeth Ackermans, and later from Ilona Sie Dhian Ho, with whom she continued her studies at the Royal Conservatoire of The Hague. Since October 2019 she studies as Erasmus student (made possible by the EU Erasmus exchange program) for one year at the Hochschule für Musik ‘Hanns Eisler’ Berlin, with professor Stephan Picard.

Pieternel received masterclasses from Emmy Verhey, Daniel Rowland, Hagai Shaham en Mauricio Fuks, during international summer courses in Germany, France, Italy and Canada. She gave concerts as a soloist with the Combattimento, Wroclaw Chamber Orchestra, and several youth orchestras. During several cooperation projects between young talent and professionals, she played alongside the Rubens Consort, Nino Gvetadze, Maja Bogdanovic and members of the Radio Philharmonic Orchestra. She is first prize winner of the Dutch National Violin Competition (2016, category Davina van Wely, 14-17 years), and the Prinses Christina Concours (2018, Region West 1, Rotterdam). In August 2016 she was awarded the Labberté-Hoedemaker prize during the Peter de Grote Festival. She may also call herself laureate of the Classic Young Masters Foundation.

She is part of the Audax Trio, together with Jorian van Nee (piano) and Florianne Remme (cello). They met through their shared passion for chamber music and have loved playing together ever since. Despite all three of them living and studying in different countries, they frequently meet to build a repertoire and give concerts. In August 2019 they participated in the Zeist Music Days, where they received masterclasses from Boris Giltburg, Alexander Pavlovsky, Elisabeth Leonskaja and others.

Pieternel plays on a violin built by Serafino Casini from 1901, kindly on loan from the Dutch National Instruments Foundation.